St. Petersburg Country Club’s course opened for play in 1924.  Its architect was Herbert Strong, a golf professional who had arrived in the US from his native England in 1905.  Mr. Strong has more than 20 course designs to his credit, including Canterbury CC in Cleveland, Engineers on Long Island the original course at Saucon Valley in Pennsylvania.  Other Florida designs include Vero Beach CC and the Ocean Course at the Ponte Vedra Beach Club. 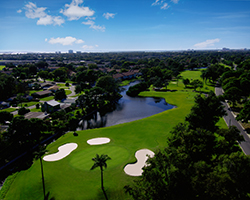 Strong’s designs featured small, elevated greens and large quantities of bunkers flanking both greens and fairways.  Most of the original fairway bunkers were removed decades ago as equipment improvements rendered them superfluous.  Although  our greens remain relatively small, a number of them were both lowered and enlarged under the direction of architect Dick Wilson in 1960.

The course closely follows its original routing.  Principal changes include number 6, which although a par five throughout has had both its fairway and green moved, the green complex twice.  Numbers 13 and 18 were changed substantially by architect Joe Lee in 1967, 13 shortened to a par four and 18 lengthened to a par five.  Number 17 was substantially changed in 1982, reducing its length but adding the water hazard which now borders the green on three sides.

Our course hosted the St Pete Open, a regular stop on the PGA tour, twelve times, the last in 1964.  Its full length at that time, approximately 6600 yards, was about the norm for tour courses of the day.  St Pete Open winners on this course include Sam Snead, Cary Middlecoff and Raymond Floyd, who won for the first time here in 1963.

In 2009, our greens were resurfaced with ChampionsTurf, which has greatly improved their overall quality.  At that time several tees were extended bringing the course’s full length to slightly over 6900 yards.  The course’s “butterfly” design provides changing wind directions on virtually every hole and the greens, although not heavily contoured, provide subtle challenges.